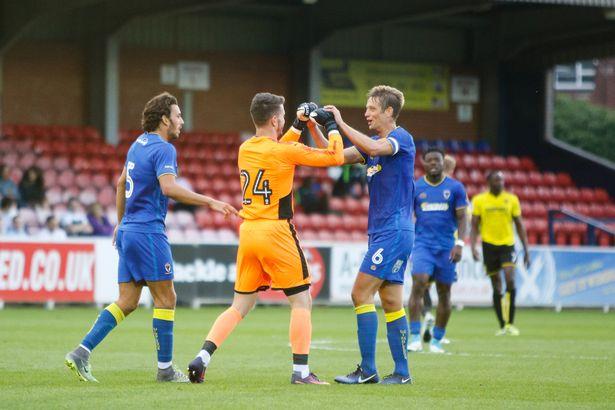 Risk. It’s a fantastic board game. I love the tactics, and with a little bit of luck, you can make some serious strides to achieving your goal. But the title says it all: you have to sometimes take some strange risks in order to achieve your goal. And I saw how the calculated risk Neal has taken this season – introducing a new style of play – paid-off against Burton in pre-season. In abundance.

So, looking at that Burton game, I would like to start from the back, and Joe McDonnell. He didn’t have to make many saves that made the Kingsmeadow faithful gasp and coo in awe, but all the other elements to his game were, simply put, brilliant. He commanded crosses and his distribution was excellent (he even made an assist to Cody McDonald’s goal), but what struck me the most was how assured he was with the ball at his feet. We played a very interesting possession game against the Brewers and it negated the tactics that Nigel Clough likes his teams to play. We drew their team out, created massive spaces on the tiny Kingsmeadow pitch, and played the ball around the opposition. And young Joe played more than his part in achieving that tactic.

Our back four (and a half, if you include Anthony Hartigan as a defensive midfielder) were incredibly assured, stemming from the confidence they had in McDonnell’s skills on the ball. Young Toby Sibbick, playing at right-back, put in a great performance and has certainly shown the management team that he isn’t here to prop up the squad numbers; Paul Robinson and Will Nightingale were so assured, so versatile, and so incredibly well organised that I can only echo Kevin Borras’s sentiment that they appeared to be a modern day Franz Beckenbauer and Hans-Georg Schwarzenbeck; and with Deji Oshilaja, we had a left back who was so at ease with moving forward with the ball at his feet, it made me wonder how Jon Meades and Callum Kennedy will ever make the team, should Neal want to stick with this formation.

Young Anthony Hartigan was, to compare to another German great, a young Stefan Effenberg. He bossed the defensive midfield like he was in his late twenties, not like he is only 17 years old. My friend’s father-in-law, who was visiting from Germany and attended the match, echoed my sentiments. When I informed him of Hartigan’s tender age, the gentleman spat half his mouthful of beer out, exasperated with that revelation. So assured in position and on the ball, he played the perfect unassuming game. Egli Kaja, on the right wing, was as good going forward as Hartigan was defending: brilliant at causing the Burton defence headaches. Dean Parrett was back to his energetic self, spilling the ball out to the wings and looking for that pass to split their defence open, whilst Andy Barcham was Andy Barcham, one we can always depend on and who is ready to run himself into the ground. Jimmy Abdou, who I have massive hopes for, had a very quiet game, but I am certain he will adapt to the Neal Ardley school of high pressure soon enough, and Cody McDonald was also impressive. He isn’t your target man or striker who will take the ball from 30 yards, run and shoot; he is a poacher – a six-yard-box striker. And he brings a whole new dimension to the AFC Wimbledon story that is being written.

I will not criticise any player on the pitch against Burton, for I cannot criticise any player. This is because they wore their heart on their sleeve, defeated a Championship team with absolute ease, kept a clean sheet, and didn’t once worry me that the “better team” was actually going to cause Wimbledon any problems. So I’m very hopeful that this new style of football will stand us in good stead this season. Sometimes it will fail, of course, but I really feel that for the most part, it will succeed, for Neal is creating a band of players who play for each other, not hoof and hope.

I never thought I would ever quote Jim Carrey, but he was right when he said, “It is better to risk starving to death then surrender. If you give up on your dreams, what’s left?” This summer’s transfer recruitment is a risk because it takes us away from any long ball football we have been accustomed to for so long. It might need a little tweaking, as is evident from the draw at Scunthorpe, but the early signs are good, and I have faith that we are heading in the right direction. After watching the game at Glanford Park on iFollow, I maintain the above sentiments ring true.