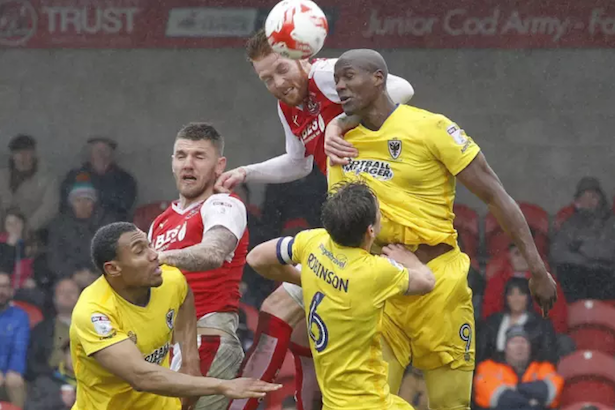 When I read that Tom Elliott had left the Dons, the first words that came out of my mouth took my friend by surprise. In all honesty I was quite taken aback too, as it wasn’t the observation I had intended to make.

It was rather obvious that we would miss his aerial presence up front, and he was also in possession of a deft touch that belied his height and build – and Notts County and Yeovil’s goalkeepers would certainly attest to the powerful shot he had in his armoury, although as both of those wonder strikes came within a couple of weeks of each other in January 2016, that previously unforeseen power might have been explained by a particularly carnivorous Christmas or a hefty dental bill that made him take his frustration out on a football. His record of 15 league goals in 78 games is hardly anything to write home about, but his overall contribution was far greater than that return might have suggested.

Tom Elliott was also one of those players who “got” our club. I know there are people out there who detest that phrase but on this occasion I make no apology and seek no alternative as it’s entirely appropriate. Maybe there is nothing to “get” about Barnet or Morecambe, but there is something deeper to understand about AFC Wimbledon and he seemed to pick up on it very early on.

He was one of those players that came to us with something to prove – not just to us but to himself. A friend of mine who supports Cambridge United was quite ambivalent about him leaving, saying at the time that he had ability but seemed to lack the mental application required. “Let’s just say he’s not the kind of player who’d run through the proverbial brick wall for you – you wouldn’t find him playing with a cast on a broken wrist, he’d be more likely to miss a couple of games with a slight knock. If he ends up playing 20 games for you this season, I’ll be surprised but quietly very pleased.”

He was also a player that really appreciated the support of the fans and at times appeared genuinely touched by the rapturous reception he would inevitably receive as he was substituted, even after he’d had a rare ineffective game. We won’t be hearing that song any more as we quite clearly haven’t got Tom Elliott, but another thing that has to be said is that no-one seems to begrudge him his move to the Championship – he wants to better himself, earn as much from football as he can and play at the highest level possible – and judging by his comments when he first signed for Millwall, he appreciated everything our club did for him as much as we appreciated what he did for our club.

So what was it that I’d said that had caused my fellow Don to react with puzzlement?

“We’re going to miss him defensively.”

I still stand by that. I genuinely believe that that is where we find our side slightly weaker than the last couple of seasons. How many times in his two years with us did he get his head to a corner and clear the danger for us? I’d argue that it was probably as many times as Robbo and Darius did. I dread to think how many more goals we would have conceded without Tom’s shiny pate deflecting a well-struck free-kick or corner out for a throw or another corner – particularly last season when our opponents’ dead ball delivery was markedly better. His defensive headers would travel 20 or 30 yards to safety as he managed to get as much accuracy into them as he did when he was attacking crosses at the other end.

At the recent Meet the Manager event, Neal Ardley revealed that his teams this season will be playing with a new style that eschews the traditional big centre forward in favour of smaller, pacier strikers. One of the reasons we’ve played with a target man since Neal arrived is the state of the pitch – meaning no disrespect to the ground staff whatsoever as you can’t make a silk purse from a sow’s ear – that dictated for most of the season the most potent form of attack was get it up to (for the previous two seasons) Tom and he’ll bring others into the game. With the newly-laid surface in place, Neal is convinced that we now have the basic tools to do the job he wants and I for one am looking forward to seeing Cody, Kwesi and Lyle execute those plans. However, with the tallest of those three players at 5ft 11ins, I can’t help but wonder who is going to be tasked with replacing the aerial ability of Tom Elliott in our penalty area.