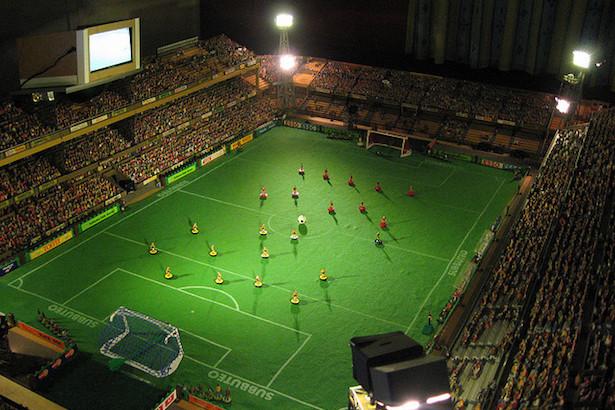 I saw a picture, on Twitter, of Malta warming up before their match against Scotland. The photo depicted 10 players in a line going the entire breadth of the pitch, and the text below stated that they were preparing for their formation already. Amusing? I tittered at the caption.

This got me to thinking about formations and their evolution over the past few decades, and how we would line up if we would adopt different tactics with our current squad – should everyone be fit. For my examples below, I will not touch on the goalkeeping position, as George Long has that role.

Let’s start with the 1950s and the common 4-2-4 line-up. This is something that Steve McClaren brought in with five minutes to go during Middlesborough’s run to the UEFA Cup Final in 2006. What makes this formation so incredibly hard is that the attacking wings of the front four have to either play as wingers that track back to defend, or risk a 6-6 score line by the final whistle. Enjoyable to watch? Probably, but just as equally frustrating to observe with the team not defending. My team for this formation would be:

How do I see this formation working for us? I can’t at the moment. Fuller and Meades would have no cover and we would be battered by the flanks. But upon looking at that line-up, you can rest assured that provided we kept the ball, the attacking side of this team would pummel the opposition.

When you look at the 1960s, you cannot help but contemplate the greatest of all Real Madrid teams. They adopted (in 1960 specifically) a 3-2-2-3 formation. Yes, they had Puskas and Di Stefano in attack, but they also had Santamaria in central defence. And their possession-based game is sometimes considered the basis on which the Barcelona team between 2000 and 2010 was built. My team for this formation would be:

How do I see this formation working for us? Maybe, on a narrow pitch, this formation would utilise the ‘playing on the floor’ that Neal Ardley wants to do right now. Abdou and Hartigan would be great defensive cover, whilst Barcham and Parrett would be excellent in setting up attacking options.

If you look at the 1970s, you cannot discard England’s World Cup winning team. Sir Alf Ramsey adopted an inverted 4-3-3 formation. This is where the shape of the midfield and forwards shape an M-W shape. This was also the biggest success of the early 1970s Ajax team featuring Johann Cruyff. No-one can deny the success of Ajax in that decade with that attacking football, however Zdenek Zeman’s Foggia in Italy adopted the same formation and caused a stir in the defensive-minded Serie A. My team for this formation would be:

How do I see this formation working for us? Well, if anything is to go by this season so far, it isn’t. This formation only works if you have a dynamic and fast midfield who aren’t playing against an over-crowded middle of the park.

The 1980s brought lump-it-and-run football to those who couldn’t play like Hamburg or Mönchengladbach. The 4-4-2 diamond was taken seriously and is one of my two favourite formations. With Felix Magath on the top of the diamond and Wolfgang Rolff being used primarily as defensive cover and the central defensive pairing of Hieronymous and Jakobs, Hamburg didn’t have much of a worry against a Juventus team featuring Tardelli, Platini, and Rossi. This goes to show that if you are solid in formation with a diamond, you are very hard (pun intended) to break apart. My team for this formation would be:

How do I see this formation working for us? This is quite an interesting system. It keeps our back four in the defensive half of the pitch: something I feel Barry would struggle with, as he is constantly bombing up the wings. Same goes for Callum. But if the back four kept their shape and defensive mentality in check, we’d probably see many 1-0 victories.

The 1990s brought one word to the fore: Goooooolazo. Italian football was at its fiercest. The defensive nous of Inter Milan, AC Milan, Juventus and even the national team brought success and massive frustration for those watching due, mainly, to the lack of goals. With all of those teams mainly adopting a 5-3-2 formation, the defences shored up the goals conceded numbers but, more importantly, developed football into much more of a chess match – and if my team won 1-0 every week, I wouldn’t be moaning. My team for this formation would be:

How do I see this formation working for us? If we don’t utilise the wing-backs, this formation has 0-0 written all over it. The midfield would be too deep and Kwesi and Lyle, up front, would cut very frustrated figures.

The Noughties brought a different nation to the fore, yet again. French football took the world by the scruff of the neck, and in the case of Zinedine Zidane in the World Cup final in 2006, a head-butt to the chest. after the success of Aimé Jacquet, 4-2-3-1 was adopted by Roger Lemerre, and with the strength of having two formidable defensive midfielders who also had the ability of creating a phenomenal through-ball, their team was a tactical sensation. My team for this formation would be:

How do I see this formation working for us? Similar to the 4-4-2 diamond shape, this would be quite defensive-minded, but were Abdou and Hartigan to play one-twos around the opposition midfield, I believe that we could have a good attacking instinct. However, we’d be reliant on out-scoring the opposition.

So then we look at the 2010s. Sorry folks: I must talk about my beloved Germany here. I could write about them for hours and bore you out of your mind. Jürgen Klinsmann decided to appoint Joachim Löw as his assistant, and after Klinsi left, it was very quickly apparent that Löw was the tactician in that relationship. Jogi has adopted the 4-2-3-1 formation but created more of a 4-2-1-3 when attacking. The ability of the two forwards to revert to midfielders or two midfielders to advance to attackers proves the tactical nous available to Löw. My team for this formation would be:

How do I see this formation working for us? As I posted above: this all depends on how Jimmy and Anthony in the defensive midfield positions link up. I’d prefer to see a 4-1-3-1-1 formation, but that is too ‘middle of the park’. However, with Toby Sibbick’s defensive nous and Jon Meades’s no-nonsense defending, I believe we would just about be okay.

Out of all these formations, I believe that the 4-3-3 is not working. Why? Because our squad is incredibly midfield-heavy. We have to look at accommodating the midfielders and take the game to the opposition again. The true Wimbledon way. Personally, I don’t care if we lose 5-0 – just as long as the players actually give a shit, and put in a bit of effort.