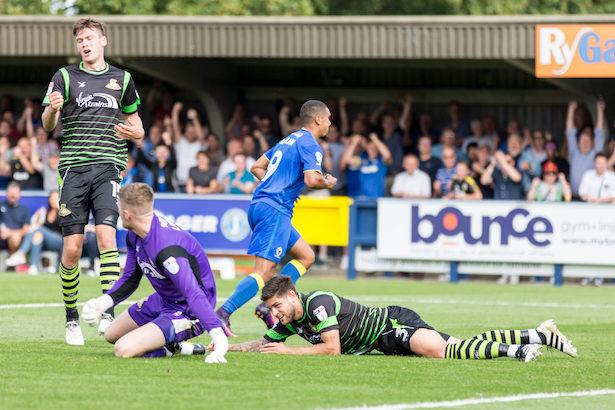 There was a touch of Championship-level class about Wimbledon’s first win of the season – and their first in League One since March.

Kwesi Appiah’s return to Kingsmeadow in the summer was much heralded by Dons boss Neal Ardley, who believed the Ghana striker should be plying his trade in the second tier of English football.

And the goal with which Appiah opened the scoring with in this victory would certainly grace a higher division.

With his back to goal, the 27-year-old forward flicked the ball past Doncaster’s Andy Butler, span the other side of the centre-half, and calmly slotted the ball past goalkeeper Ian Lawlor from 12 yards.

The finish was of a quality so far removed from the hour of football that had come before it, as neither side could find any energy or inject any impetus in the late-summer heat.

A particularly insipid first-half, in which neither side managed an attempt on target, offered no indication of the ability Appiah – or any of his team-mates, for that matter – could provide.

Indeed, it would have been a most optimistic Wimbledon fan to predict, at the half-time break, that the Dons were going to end their 437-minute wait for a home league goal.

But once Appiah injected his moment of class, a previously morose Kingsmeadow stirred, and Ardley’s men found their zeal.

Just three minutes after the opener, Andy Barcham doubled the lead, dribbling from deep at the heart of the visitors’ defence to fire home a low shot, off Lawlor’s right-hand post, from 25 yards.

It was a deserved goal for the forward, who was Wimbledon’s liveliest player throughout, and ended his own search for a goal, having not scored since February – and not at Kingsmeadow since August 2016.

But despite the Dons’ lack of goals of late, with just one scored in their last 900 minutes of League One football, Ardley was never worried about a lack of firepower in this squad.

“I have every confidence in the forwards we have scoring goals,” he commented after the game. “My job is to get the team enough of the ball and in good positions to create chances for them.”

In the second-half of this encounter, he certainly did his job, although Barcham, who Ardley described as “a real menace”, was key to this.

The 30-year-old’s display, linking nicely with Taylor in and around the 18-yard box, was just lacking with the final pass, in keeping with much of the Dons’ season so far.

It has been poor decision-making in the final third that cost Wimbledon in their first three games, as decent performances at Scunthorpe and Fleetwood were not reflected in points gained.

The lack of service to the industrious yet frustrated Cody McDonald meant the summer signing from Gillingham was unlucky to find himself on the bench for this game, and until his goal, Appiah’s return to the side did not appear merited.

His, and the team’s, improved second-half came likely as a result of a slight tactical change, in which he and Taylor played much closer together as a front-pairing.

Ardley’s preferred 4-3-3 system was still very much in evidence, but with Barcham hugging the touchline and George Francomb offering width on the right from his usual midfield berth, spectators can be forgiven for thinking a more traditional 4-4-2 was in effect.

The fluidity allowed Wimbledon to take charge of affairs, and Lawlor did well to block Barcham from scoring again with 20 minutes to go.

Not that it ever looked like the home side would need another goal to secure their victory. Doncaster, who had won their previous two away games at Blackburn and Bradford in league and cup respectively, could not find any intensity in their play, with George Long only once called into action in the Wimbledon goal.

That said, Callum Kennedy did manage to beat Lawlor, but his shot from a free-kick on the edge of the box hit the underside of the crossbar and bounced clear.

And while a third wouldn’t have flattered the Dons on the evidence of the second period, the home faithful were more than grateful for the two goals they were able to celebrate.

“It was very nice for the team morale to get a clean sheet, a couple of goals, and three points,” said Appiah. “It was nice for me to get a goal and we can push on now.”

They will do so away at Blackpool this weekend. Having ended their search for a win, and a home goal, Wimbledon will now look to secure their first three points on the road since February.

The free-scoring Tangerines will be a test, but under the marshalling of the outstanding Deji Oshilaja at centre-half, the Dons might just need a single goal to really get their season motoring.